Written by Gayane Khachatryan on 17 November 2015. Posted in Courts 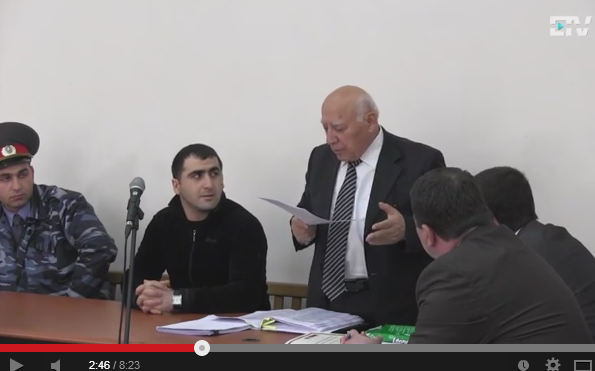 Ashot Arushanyan was accused of theft and was found guilty of violating the first point of the third part of Article 177 of the RA Criminal Code. He was sentenced to five in a half years of imprisonment. The case was decided on August 4, 2014 at the Court of General Jurisdiction of Kentron and Nork Marash Administration Districts of Yerevan with Judge Mesrop Makyan presiding.

The case against Ashot Arushanyan was taken to the Court of Appeals and the guilty verdict from the First Instance Court was upheld.
Ashot Arushanyan is accused of co-conspiring with Edgar Karakeshishyan and helping him steal 56 million AMD ($135,000) from Armen Manukyan’s car, the deputy director of Marina Grain LLC. At the time, A. Arushanyan was an employee at HSBC Bank Armenia and worked as a Risk Officer. According to officials, he informed E. Karakeshishyan of the transfer that Armen had made, giving him the knowledge and opportunity to steal the money. There was another defendant, Artashes Galustyan, that was accused of conspiring with Ashot and Edgar, however, he was released after providing testimony accusing Ashot of the crime.
Artashes Galustyan was found dead at his house after he was released and the medical examiner ruled it a suicide. However, it is believed that he committed suicide due to the abuse and violent threats he endured while in police custody. Tigran Arakelyan, an inmate who shared a cell with Artashes while he was detained, explained that Artashes confessed to him that he had been beaten and tortured by the police in order to give a false testimony. However, the court disregarded Tigran’s statement because of his lack of credibility and his “dislike” of the police.
Artashes Galustyan’s testimony was the main evidence used against Ashot in his case. Ashot’s attorney, Liparit Simonyan, argued that his testimony should be considered inadmissible since a deal was arranged between the preliminary investigation body and Artashes, where Artashes would present false testimony in order to be released. However, Mr. Simonyan’s motion was denied and his defendant declared a hunger strike with his family. The Arushanyan family staged a hunger strike in front of the Presidential Palace in a sign on protest against the unlawful imprisonment of their son. Lavrent Arushanyan proclaimed that his son is incapable of committing such a crime. “He finished his bachelor’s and Masters at the YSU Faculty of Economics with distinction, graduated form the American University with excellence, was admitted to the Doctoral program of the YSU Faculty of Economics with excellent marks and was to defend his candidacy in a week when he was unlawfully arrested.”