Written by Gayane Khachatryan on 23 June 2015. Posted in Freedom of Speech 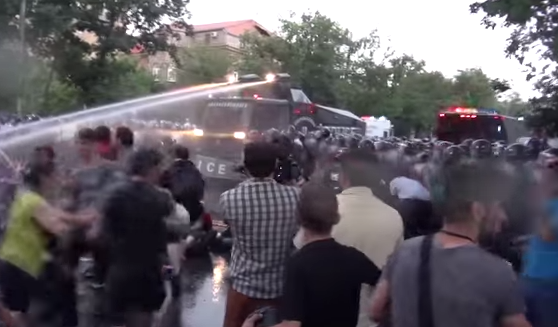 Early Tuesday morning, police officers violently dispersed protesters who were holding a peaceful sit-in protest on Baghramyan Avenue against the recent price increase of electricity. There were over 5,000 demonstrators who marched to the Presidential Palace and over 200 protesters were detained and taken to various police stations and hospitals.

After a 4-day sit-in at Freedom Square in central Yerevan, the protesters marched to the Presidential Palace on Baghramyan Avenue to express their discontent and anger, since the electricity price hike was not canceled. On June 17, Armenia’s Public Services Regulatory Commission of Armenia (PSRC) approved a new electricity tariff that raised the price of electricity to 6,93 AMD. Previously, citizens had to pay 41,85 AMD and now the price has reached 48,78 AMD per 1 kWh and the Armenian population is furious because they are unable to afford the increase in price.

The protesters made their way to Baghramyan Avenue toward President Serzh Sargsyan’s office, where they encountered hundreds of armed police officers who had formed a barricade and closed off the road; therefore, the protesters spontaneously staged a sit-in in the middle of the road, blocking traffic between the intersection of Baghramyan and Ishakyan. More police officers arrived at the scene with water cannons, military vehicles and barbed wires to forcefully remove the protesters from the street. People were beaten, hosed down, pushed and shoved in order to clear the street. There were numerous individuals who sustained serious injuries and several journalists and activists who were trying to document the abuse were also arrested and brutally beaten.

Some individuals who were arrested and detained are said to have been charged with hooliganism (RA Criminal Code Article 258 Part 1). Other protesters were taken to the hospital because of the beatings and excessive force used by police officers.

There are several videos that illustrate the abuse and harassment the protesters experienced. Visit humanrightstv.am to view the footage.
Written by Sona Movsisyan.