Written on 28 April 2011. Posted in Freedom of Assembly 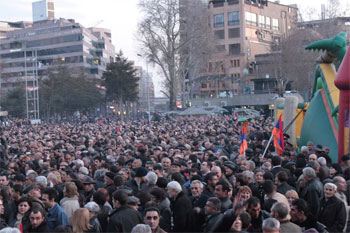 According to www.A1plus.am on 28th April 2011 at 8:00, Artashat city police officers visited secretary of Artashat regional office of Armenian National Party Aramayis Barseghyan and urged him not to participate in the demonstration organised by the Armenian National Congress oppostition at 18:00 in Freedom Square in central Yerevan. Barseghyan informed “A1plus”: “When they saw I was resisting, they took me to the police station forcibly”. According to Barseghyan, he has already been in the police station for 7-8 hours, but no action has yet been undertaken. Barseghyan expressed concern that he would not be released until the rally’s end.

According to the Helsinki Association’s information, Barseghyan was still in police station at 15:00.