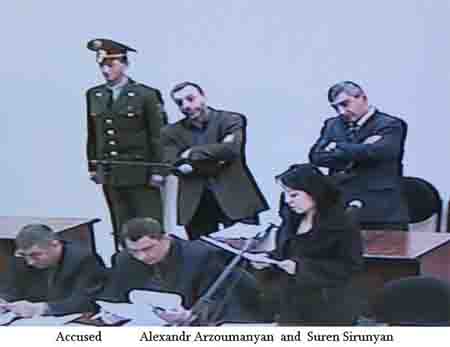 The first trail of Alexander Arzumanyan, ex-minister of foreign affairs of Armenia and Suren Sirunyan began on April 08, 2009 at the Court of First Instance of Shengavit District, Yerevan. The defendants are accused of Article 225, part 1 of Criminal Code of RA (Organization of Mass Disorders). Many testimonies given during the court hearing differed from those given in the investigation period. It is rather interesting that preliminary testimonies were signed on April 29, 2008, while the witnesses gave their testimonies on March 2008.
The trial of April 22, 2009 was postponed till April 27, 2009 as the witnesses were not present at trail. The judge made a decision to bring them to court.