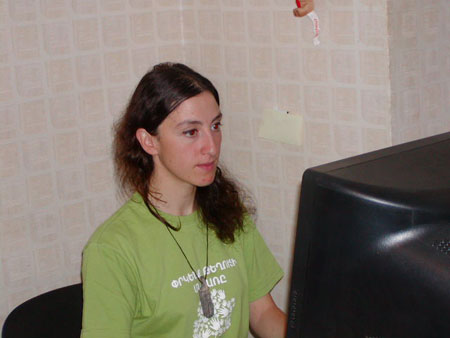 Mariam Sukhudyan is a coordinator of Teghut Forests Protection Group which struggles against the illegal cut down of Teghut forests of Armenia.
M. Sukhudyan worked as a volunteer at Special School No. 11 of Nubarashen in the frameworks of a project "Best 10 Schools" implemented by UN. Now she is accused of Article 333, part 1, point 3 of the Criminal Code of Armenia (False Denunciation) which provides up to 5 years of imprisonment.
On November 2008 Haylur program (National TV Station of Armenia) broadcast a video material about the morals of Nubarashen Special School No. 11, particularly about sexual harassments done by teacher Levon Avagyan toward children of the school. However, an accusation is brought against the video operator of that video material Mariam Sukhudyan. A day later Mariam and her friends were called to the Investigation Department of Erebuni district in order to give testimonies. According to M. Sukhudyan during the questioning the investigator told her that even if the situation was true, however it will be against her, as she would be accused because she knew about the crime before and did not let the law enforcement bodies know about it. Also, the investigator told Mariam that one of the girls refused to admit her words and affirmed that Mariam herself instructed her what to say. On 15 August, 2009 Mariam received a summons which said that M. Sukhudyan was accused of part 1 of Article 135 of the Criminal Code of Armenia (Slander). Note that girls who told about the sexual harassments in the above mentioned video are not in Armenia at present. This means that no confrontation took place in the frames of criminal case. According to the information that Helsinki Association possesses one of those girls is in Russia, but no one has any information about the other one.
Besides the struggle against the illegal cut down Teghut forests that M. Sukhudyan is engaged in, she also witnessed and recorded the building process of a new house belonging to the Chairman of the National Assembly of Armenia Hovik Abrahamyan. Rocks and crags which carry historical-cultural value were used in the construction of his house. As well as she witnessed and recorded a hunting process in "Khosrov Forest Resort.

On October 20, 2009 Mariam Sukhudyan received a new summons from the Investigation Department of Erebuni district. According to the summons she had to come to be questioned as a defendant. An accusation was brought under Article 135, part 1 of the Criminal Code of Armenia /"Slander"/. Prosecutor D. Grigoryan instructed that the accusation of M. Sukhudyan false denunciation should be changed to slander.
On October 21 Vigen Mesropyan, deputy chief of the Police Department of Erebuni district suggested her to use the right to amnesty declared by the Parliament of Armenia on June 19, 2009. However, M. Sukhudyan refused saying that she did not find herself guilty and demanded that the criminals should be punished.
Now, the investigation stage is over.

On November 2009 the lawyer of Mariam Sukhudyan filed several petitions to the Investigation Department of Erebuni Police in order to attach one voice recording to her criminal case as evidence (the recording was attached to the case before, but the investigators did not take it as evidence). Now the petition was granted. Later on, the lawyer filed two more petitions to stop the prosecution actions against M. Sukhudyan and to carry out appropriate actions regarding the teacher Levon Avagyan. These two petitions were rejected.
Let us remember that the investigation stage was over and the case was to enter the Court. However, the case did not enter the Court, being guided by the instruction of the Prosecutor of Yerevan the case was returned to the investigation stage as it was considered to be incompleted. After that, M. Sukhudyan was again called to be questioned as an accused one. Now the case is with the Investigation Department of Yerevan (it was with the Investigation Department of Erebuni Police).
P.S. Two volunteers of the program implemented at Special School of Nubarashen have already been questioned (Mariam also participated in that project).

Let us remember that the preventative measurement of M. Sukhudyan is a signuture not to leave her place of residence.