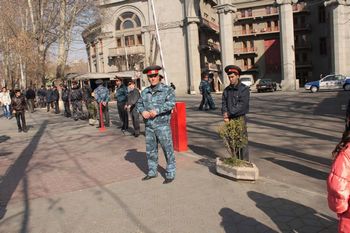 On March 17th 2011 around 16:00, the entrance to Freedom Square was closed by police at the Mashtots-Tumanyan crossroads, who stopped a Helsinki Association monitor, Arman Veziryan, as well as other journalists from entering the square, claiming they had been given orders to restrict access. Veziryan asked officers who had given the order, but they refused to answer. Police officers told journalists that people already inside the square area, should they leave the area, would be refused re-entry. When asked by journalists if the police officers were deliberately obstructing them from their professional duties, an unnamed police lieutenant-colonel responded in the affirmative.